I am super excited to be a part of this pre-release blitz to help spread the word that THE FLAME NEVER DIES, the second book in Rachel Vincent’s The Stars Never Rise series, is releasing on August 16th!

For those that are already caught up on this series, the wait is (almost) finally over! For those that haven’t yet met Nina Kane or discovered the dark and dangerous world she lives in, there’s still time to catch up – and a really sweet deal (details below) that will make you want to move this series to the top of your reading pile!

Scroll down to learn more about THE FLAME NEVER DIES and THE STARS NEVER RISE, the author, Rachel Vincent, and to enter the giveaway for a chance to win a signed hardback set of these two amazing books!

And for even more peeks at the fab content being shared throughout the blitz – shareable quotation graphics, excerpts and an interview – look for other blogger participants now through August 15th on social media #TheFlameNeverDies.

In anticipation of the upcoming release of THE FLAME NEVER DIES, the publisher is dropping the price for the eBook version of the first book in the series – THE STARS NEVER RISE! So if you haven’t yet discovered this series, now is the perfect time!

Just head over to your favorite online e-tailer to look for THE STARS NEVER RISE with its newly lowered price or visit one of these online stores – AMAZON | BARNES & NOBLE | iTUNES | GOOGLE PLAY | KOBO.

Please note that at the time of this post some stores may not yet have updated their sites to the promotional pricing. If they haven’t, be sure to check back for this awesome not-to-be-missed deal!

About THE FLAME NEVER DIES 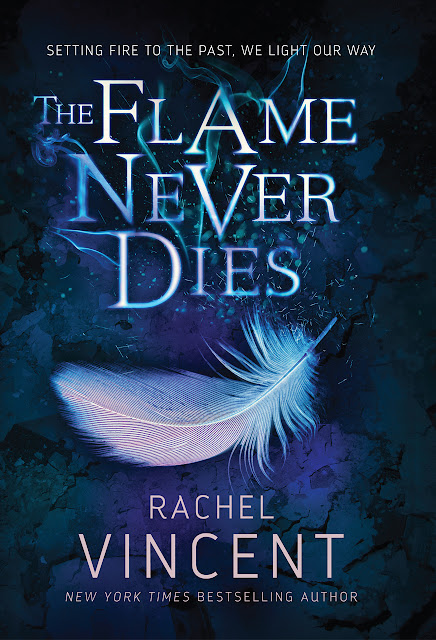 ONE SPARK WILL RISE. Nina Kane was born to be an exorcist. And since uncovering the horrifying truth—that the war against demons is far from over—seventeen-year-old Nina and her pregnant younger sister, Mellie, have been on the run, incinerating the remains of the demon horde as they go.

In the badlands, Nina, Mellie, and Finn, the fugitive and rogue exorcist who saved her life, find allies in a group of freedom fighters. They also face a new threat: Pandemonia, a city full of demons. But this fresh new hell is the least of Nina’s worries. The well of souls ran dry more than a century ago, drained by the demons secretly living among humans, and without a donor soul, Mellie’s child will die within hours of its birth.
Nina isn’t about to let that happen . . . even if it means she has to make the ultimate sacrifice.

“What’s your name, sweetheart?” Ana asked the boy, and I realized there would be no teaching her caution where children were concerned. She had spent five years as a grade-school teacher.

“Tobias.” The boy’s voice was soft and hoarse, as if he’d been crying. His gaze slid from Anabelle to me, and I decided the glazed look in his eyes was from shock.

He reminded me of the kindergartners I’d spent my service hour with every day of my senior year, until the Church had declared me a cancerous wart on mankind’s collective hind end. Tobias could have been any kid in my class, terrified and traumatically orphaned.

We couldn’t leave him alone in the badlands. Yet ours was no life for a kid.

The irony in that thought hit home when my sister waddled past me, one hand on her huge belly. “Melanie,” I called, but she waved off my warning. When I glanced at Finn, he nodded to give me the all clear, the rifle still aimed at the ground. He’d inspected the car from the outside and squatted to peer beneath it, and had found no immediate danger.

Still, Mellie was too pregnant to fight or to flee from sudden danger, so I followed her, ready to pull her out of the path of evil should a demon burst from the bloody car.

“Are you okay, Tobias?” my sister asked, kneeling in front of the child with Anabelle’s help.

For a moment he only stared at her, studying her pale skin and even paler hair. Finally he nodded, his gaze fixated on her stomach, while I tried to calculate the mileage his family must have traveled in that doomed blue car. “You got a baby in there?”

Melanie laughed, and I marveled at the fact that she could find joy where the rest of us saw only tragedy and hardship. “Yes. And I like your name, Tobias.” She laid one hand on her stomach. “Maybe I’ll borrow it if this little one’s a boy.”

Melanie was a tireless optimist, not blind to the dangers of the world, exactly, but not quite concerned enough about them. She refused to think about the overwhelming odds against her child’s survival, and neither she nor Ana had even glanced at the carnage inside that blue car.

And I hadn’t heard her mention Adam, the ill-fated father of her child, in weeks.

Reese pulled the SUV to a stop beside our truck, right in the middle of the road, and the other half of our group poured out of the vehicle. “What the hell?” Footsteps crunched in the dirt behind me, and then Reese and Grayson stopped at my side. She carried a plastic jug and he had a hose wrapped around his massive left arm.

“Looks like the parents are dead in the front seat,” I whispered. “Not sure what happened yet, but Finn hasn’t found any immediate threat.”

Devi rolled her eyes and scuffed her boot in the dirt on the side of the road. “What the hell are we supposed to do with him?”

“We can’t leave him here.” Maddock threaded his arm through hers, frowning as he watched the little boy. “It’s a miracle he’s still alive. He must not have been here long.”

“We’re not even going to think about taking him with us until we know what killed his parents.” Devi circled the car toward the driver’s side and used one hand to shield the sun from her face while she bent to peer through the window. When she stood a second later, she looked sick. “Nothin’ but blood.”

While the rest of us took a closer look at the car, Grayson, Ana, and Mellie lured Tobias toward the cargo truck with promises of water and chocolate from a box of sweets that had been intended for the general store in New Temperance.

As Devi and Finn had said, the front windows were too caked with blood to show anything at all, and through the rear windshield we could see little more than the outlines of two bodies sitting in the front seats. The trunk door stood open a couple of inches, and when I lifted it, I saw that the narrow center seat had been folded down, creating a small path into the trunk from the backseat of the car. A path just wide enough for a six-year-old.

My stomach twisted at the thought of what Tobias must have witnessed. How could any kid see that much carnage without being psychologically destroyed?

When the child was out of sight behind the cargo truck, Maddock opened the driver’s door while Finn aimed his rifle at the interior just in case. Nothing jumped out at us, but after one glance inside I gasped and stepped back. Finn’s jaw tightened, and even Devi covered her mouth in horror.

The man and woman, still buckled into the front seats of the car, were drenched in blood fresh enough to glisten in the afternoon sunlight. The dashboard, windows, windshield, and floorboard had all been heavily splattered with what could only have been an arterial spray.

Yet even through all the gore, two things were clear.

First, the man and woman in the blue car were not Tobias’s biological parents—their skin was as pale as mine, even accounting for the pallor of recent death. And second, based on the blood and bits of flesh caking their right hands, the couple’s wounds appeared to be self-inflicted.

The man and woman had simply pulled onto the side of the road, then ripped out their own throats.

Rachel Vincent is a former English teacher and an eager champion of the Oxford comma. She shares her home in Oklahoma with two cats, two teenagers, and her husband, who’s been her # 1 fan from the start. Rachel is older than she looks and younger than she feels, and she remains convinced that writing about the things that scare her is the cheapest form of therapy—but social media is a close second.

About THE STARS NEVER RISE 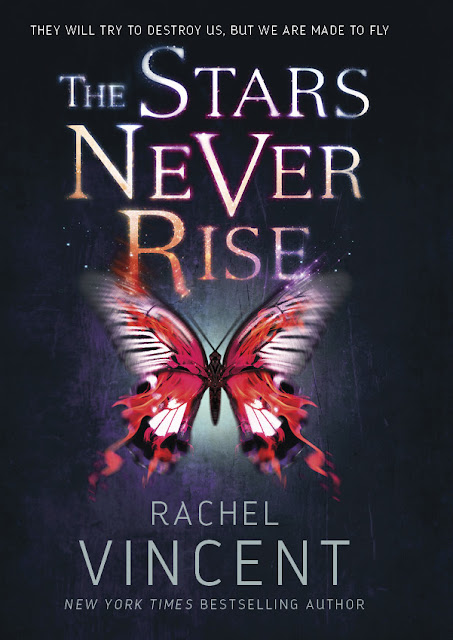 ***See above for details on the promotional pricing of the eBook

Sixteen-year-old Nina Kane should be worrying about her immortal soul, but she’s too busy trying to actually survive. Her town’s population has been decimated by soul-consuming demons, and souls are in short supply. Watching over her younger sister, Mellie, and scraping together food and money are all that matters. The two of them are a family. They gave up on their deadbeat mom a long time ago.

When Nina discovers that Mellie is keeping a secret that threatens their very existence, she’ll do anything to protect her. Because in New Temperance, sins are prosecuted as crimes by the brutal Church and its army of black-robed exorcists. And Mellie’s sin has put her in serious trouble.

To keep them both alive, Nina will need to trust Finn, a fugitive with deep green eyes who has already saved her life once and who might just be an exorcist. But what kind of exorcist wears a hoodie?

Wanted by the Church and hunted by dark forces, Nina knows she can’t survive on her own. She needs Finn and his group of rogue friends just as much as they need her.

Courtesy of the author, there is a blitz-wide giveaway for…

Enter in the Rafflecopter below…