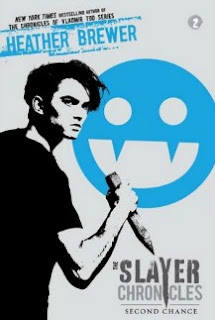 The stakes are life or death

The summer after Joss failed to kill the vampire Vladimir Tod, he gets a second chance to prove himself as a Slayer. He is sent to New York City to hunt down a serial killer that the Slayer Society believes is a vampire. It is up to Joss to lead his Slayer team, and through their detective work, they discover that there are actually four vampire brothers who are on the killing rampage. Joss must use all his skill to save the innocent people of New York City from the murderers. Joss’s status as a Slayer depends on it.

The Slayer Chronicles can be read alongside The Chronicles of Vladimir Tod or entirely on their own. This second installment gives readers even more insight into the nightmares that drive Joss the Slayer.

Once again, Heather Brewer has written an amazing and entertaining book. I’ve grown to really care about Joss as a character and as a person. You really don’t get to know him in The Chronicles of Vladimir Tod – All we know if he’s trying to kill Vlad, and we hate him for this. But seeing his backstory has really changed my opinion of him.

The first chapter was a great introduction. It recapped the first book without being boring and without info-dumping. Brewer jumps right into the story; it’s fast-paced and full of action, right from page one. Sometimes, it takes at least 50-100 pages before the story really gets going, which can make it feel like it’s dragging. But with Second Chance, the action is immediate.

Joss’s dreams about Cecile are getting so creepy. They seem very realistic, and sometimes I had to turn back a page or two, just to find the spot where it said Joss blacked out or fell asleep, to make sure it really was just a dream. The torment Joss feels over his sister’s death is obvious, the guilt laying a heavy burden on him.

Joss takes on a lot of responsibility in Second Chance, though much of that responsibility is forced on him by the Slayer Society and Abraham. Joss has grown to be wise and confident, though he doesn’t always feel this way. His growth from book one to book two is very obvious. He doubts himself much too much, though he still does a great job of accepting his role in Second Chance. He throws himself into his duties, and manages to do more, learn more, and fight more than his older and wiser team members. At the same time, he struggles with finding his place as a slayer, as well as with his resignation to kill vampires, to see them all as evil.

Morgan quickly became one of my favorite characters. He was always loyal to Joss, helping him and teaching him in any way he could. He treats Joss as an equal, like a brother. He doesn’t dumb things down for him. My fingers are crossed that he continues to play a significant role in the series, mostly for Joss’s sake. I don’t think Joss can handle another betrayal.

We get a lot of insight into what Joss was thinking the night he staked Vlad. Seeing his guilt, his confusion, gives the reader the opportunity to understand Joss’s feelings regarding Vlad and how he feels about being a slayer. I also loved seeing Otis, and the exchange between Otis and Joss was intriguing.

Overall, I really loved this book. I mean, it’s Heather Brewer. What’s not to like? The end was epic and Joss really – in my opinion – proved himself. The end was a bit ominous and chilling, though, and there are a few characters I don’t fully trust. Second Chance definitely sets things up for an incredible ending in Third Strike. I’m excited to read it and see what happens!

Also, as a side note, I loved the Buffy the Vampire Slayer reference!